It can be very stressful, as I put a lot of pressure on myself to make it perfect for the customer. It can also be hard to interpret someone else's vision, which they may not be able to articulate in a way I can translate into art. And often, the look they're going for is out of my artistic wheelhouse. Yet I push forward anyway. Long story short, when all is said and done, I sometimes end up regretting taking on the job in the first place.

So for the last few years, art has really fallen off my radar, as other things have taken my attention, like woodworking. And oh yeah, that pesky "day job" that pays all the bills.

But recently, I was asked to do a commission, which I accepted. And I'm very glad I did.

I was approached by a friend and former co-worker to create an artistic tribute to a good friend that had recently passed away.

The core idea was pretty straightforward: draw a cartoon of this friend, whom I'll refer to as "Ted" (not his real name).

And Ted should be drawn hanging out the window of his beloved '63 Pontiac Tempest as it's driving away. Okay, I've not really drawn cars before, but I'm still with you.

And then put Boba Fett in the passenger seat, also hanging out the window, flipping the bird.

Wow, okay. Turns out Ted wasn't just a car guy but a big geek as well, which I can relate to (the geek part; I know nothing about cars).

Now, if this request had come from a random stranger, I'm not sure I would have attempted it. But I really wanted to do this for a friend, so I got started.

Since my art muscles were rusty, I did a few sketches on my iPad, mostly with some cartoony caricature studies just to see if I could get a likeness down. My first thought was to do a caricature, but the client wanted something a little more realistic.

One real challenge was that I only had a handful of photo reference for Ted. And one requirement was that he be drawn with a mohawk which he'd had when he was younger, but not later in life. Unfortunately, there were only a couple photos with his mohawk and they weren't very detailed. So I had to kind of wing it. 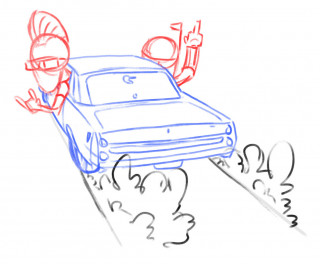 The first step was to sketch the entire layout. I did a very rough sketch of the car with the two characters and sent it off, crossing my fingers. The client loved it, so it was time to proceed.

It took some time, but I finally landed on a likeness for Ted that struck a balance between realistic portrait and caricature. And of course, I've drawn Boba Fett before, so that didn't take long.

Now to the car. Oof.

I can count on one hand the amount of times I've ever attempted drawing a vehicle, at least something that's not a spaceship. I had a few photos of the Tempest, but nothing with the exact right angle I needed. I sought out photo reference on the web, but didn't find much. Most matches were for a Pontiac GTO, which is similar. I then looked for 3D models I could maybe pose in the right way. Again, nothing but GTO's, and most were either expensive or not quite right in some way. 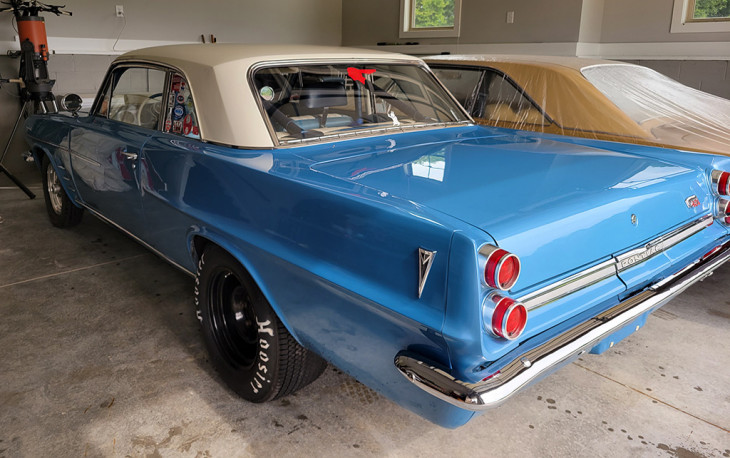 The real Tempest. I mean come on, how pretty is that?

Luckily, I got a new batch of photos from the client, who had possession of the car, and one was perfect. I know the word "trace" is a dirty one, but at this point, I was gonna trace that sucker. I lightly outlined most of the major features of the car, just so I wouldn't have to worry about getting proportions wrong or leaving something out.

I spent a lot of time in this sketch phase sending daily updates to the client. It was super important that they be happy with the style and likenesses before any sort of detail work or painting started.

Going into this, I was planning on doing my usual cartoon style, which would be black inks with solid colors and some shading/highlights. I showed the client some of my samples, and realized they wanted something a bit more painterly. It had been some time since I'd done any digital painting, but I dusted off my Wacom Cintiq tablet and got to work.

Thankfully, I still had muscle memory in Photoshop and it wasn't as hard as I'd feared to get back into it. I also went back to a few of the digital artists I've followed over the years for some pointers. 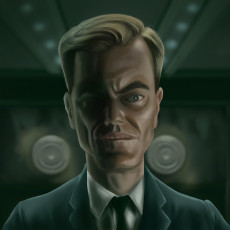 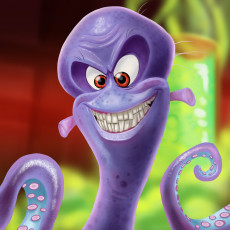 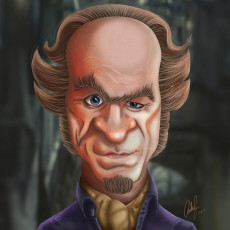 A few of my last digital paintings. Not great, but not terrible either.

Overall, the painting process went really well. I was frankly surprised at how quickly I got back into a groove. I initially was still going to keep dark pencil lines in place, or even do black inks for the line work, but I wanted to push myself to make everything painted. That's always been a struggle for me, but once you get it to work, it's hard to go back to leaving those pencil lines in.

Painting Ted and Boba went reasonably quickly, given that I had to work on all this nights and weekends. And then it was onto the car...

I was afraid of painting the car most of all. It didn't have to be photo-realistic, but I wanted it to look as real as possible. I jumped in, and just tackled it one section at a time. Things like the tail lights seemed to take forever as they were made up of lots of different shapes and I didn't want to try free-handing them. They also wanted the license plate to say "Cheers", and we went through a couple iterations to get it right. 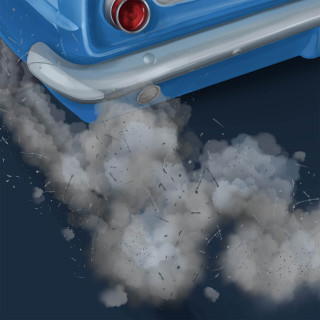 Just look at that smoke!

Then it was onto the trail of smoke. They wanted it to look like the car was peeling out and they were driving off into the sunset. I had initially drawn some very cartoony smoke, taking inspiration from Calvin & Hobbes. But as the painting went more and more realistic, that wasn't going to work. I thought about trying to paint smoke by hand, but opted to buy some cloud and debris brushes from Aaron Blaise. With some trial and error, I was able to make some really nice rolling smoke. And adding the extra dirt and debris kicked up by the tires was the perfect little touch.

And finally, I needed some sort of background. It didn't need to be elaborate, but more than just a solid color. I ended up creating a foreground and sky with some gradients, and added a few stars to the sky as if they were blasting off into space. 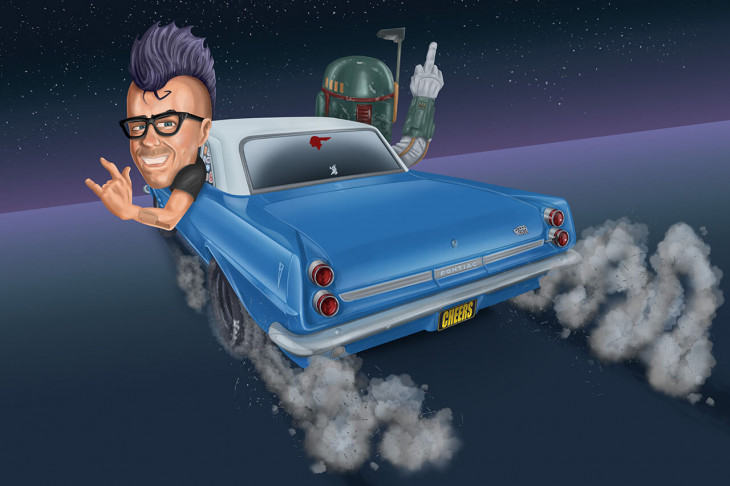 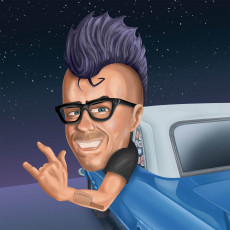 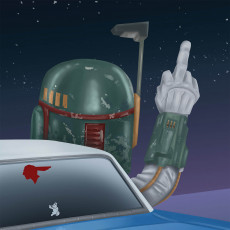 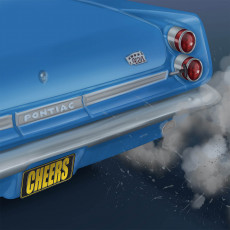 Once the entire piece was finished and approved (whew!), I needed to deliver high-resolution files. I wasn't totally sure how they'd be used, but the client mentioned prints, stickers and maybe shirts. So I exported the main image and then created some versions with transparent backgrounds that could be used for stickers or other items. 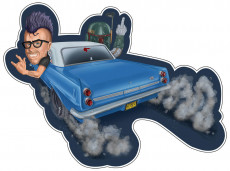 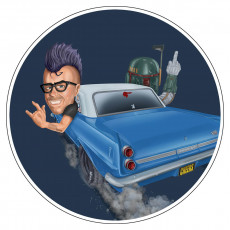 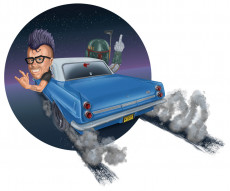 I waited patiently for a couple weeks to hear how the memorial went, and how the art was used. Then I got this super nice note from the client:

Everyone was floored and loved it. I'm still wondering why you aren't doing art for a living. His sister came all the way from Memphis. She loved the art so much!

We made a few prints, some stickers and some shirts. The stickers are already on restaurant walls and bike helmets. Grown 40+ year old men cried after seeing the art. We're still getting messages about how great it is. It is definitely top notch work.

They all thought it captured Ted in the best way. Everyone wanted to know who in the world the artist was because they did such a great job. I couldn't have been happier to tell them it was you. I can't put into words how awesome this was. You are truly gifted, and you have a LOT of new fans.

Thank you a million times.

This made me SO happy (and relieved) to hear. I was super honored to have been able to shine a little light on what I'm sure was an emotional day.

As a result of doing this work, which at first I didn't even know if I should tackle, I kind of rediscovered my art again. Over the past few years, my focus had shifted from art to woodworking. And due to the pandemic and various family and personal issues, art just kept getting pushed further and further off my radar.

But now, I'm super excited to start getting back to it. I had always feared that I may not get back on the horse, or that I'd somehow lose my art ability, but when this piece came out so well, it was a huge shot in the arm.

So definitely keep watching for more art, posted more regularly. And I've also already rebuilt and relaunched an online store where I'm selling not only prints and t-shirts, but original pieces of artwork. Maybe it'll take off, maybe it won't, but I'm motivated to find out.

Now, back to the (digital) drawing board!

By the way, if "1963 Pontiac Tempest" sounds familiar, as it did to me, maybe this is why: